The History of the Assembly at Roseisle 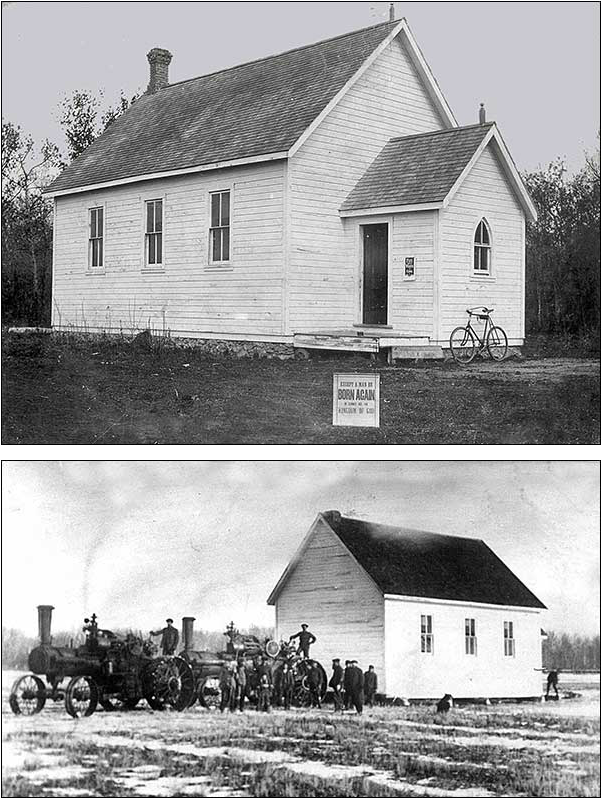 Top: The Gospel Hall in 1902 -- Bottom: Moving the Hall in 1908, credit Coleman Collection
Any written history that simply amounts to an account of dates, places, and unknown names falls short of preserving a purposeful record for those who would read it. True history is the record of God working in this space of “time” – a record of Him working in the hearts and lives of individuals. 'His Story' brings life and meaning to history. Thus it is that the history of those who meet as a local church in the Gospel Hall in Roseisle, begins with one individual over 120 years ago.

Edward John Moon immigrated to Canada from England in 1891, settling in Carman, Manitoba where he established a baking business. As a child he had often accompanied his father, who was a Methodist lay preacher, as he conducted church services; and had spent much time thinking and wondering about the things he heard from the Bible. When he arrived in Carman he came in contact with a relative, Edwin Moore, who told him of the clear gospel message he had heard and accepted while in Ontario – the message declaring that “Christ died for our sins” (1 Cor. 15.4). Edward Moon found peace in this truth and began to seek a greater understanding of the simple truths of the Word of God.

In 1892, his fiancée, Minnie Wiltshire joined him in this country and they were married in Carman on November 19, 1892. Shortly after this two gospel preachers came to Carman where they conducted three weeks of tent meetings. During this time they stayed with Edward and Minnie and as she heard them praying in the home Mrs. Moon became upset, wondering if, despite her religious and sincere manner of life, she was not right with God.

Times were hard and as many people were so poor that they could not always pay for their baking, the Moons decided to sell the business and move to the bush country up in the hills southwest of Roseisle. At this time Edwin Moore had a store nearby (N1/2 17-6-7W) and the two families began meeting in the Moons' home with a desire to follow what they understood of the teachings of the New Testament.

About the year 1897, a teenage girl, either a daughter of the Moores or a neighbor, passed away. Having the responsibility of making the necessary funeral arrangements, Mr. Moore contacted two preachers who he knew of who agreed to come and take the funeral service. As the gospel was faithfully preached, the whole community was stirred. Returning home from the funeral, a young woman, Esme McPhail, remarked to her mother, “That's the first time I've been to a funeral where they didn't preach everyone into heaven.”

The following February gospel meetings were held in the schoolhouse located on NW 21-6-7W, about a mile west of the present village of Roseisle. Just before the meetings began, Mrs. Moon was again upset about her spiritual state and realized that she had nothing to depend on for eternity. One day, while making a pie, the words of the Bible came to her mind – “Christ died for the ungodly” (Rom. 5.6) – and realizing that meant her, she trusted Him for salvation.

The gospel meetings continued for thirteen weeks and in spite of bitterly cold weather (between -30 and -40°) the people attended well, arriving in sleighs and cutters, many of them having a quite a distance to travel. Often the Moons themselves would not get back home from the meeting until after midnight, and there were others who had further to go. However, the snow and cold did not keep the people away, and over 50 came to know “peace with God through the Lord Jesus Christ” (Rom. 5.1).

Apparently a newcomer to the community asked, “Who are these people who are creating such a stir?”  The reality was that the simple country folk who were gathering every evening to speak of the message of the Bible had no special charisma or skills to create a stir.  The working of God in the hearts of individuals as they hear the His Word and respond to it is a power beyond human understanding.  “...It is the power of God unto salvation to every one that believeth” (Rom. 1.16).

Referring to those days Mrs. Moon wrote:
“The pioneer preachers tramped with their Bible bags on their backs each day and visited all homes within miles. There was not a home where someone was not concerned. They'd never heard the simple gospel before. The meetings were held in the small log schoolhouse one mile west from what is now the village of Roseisle. We paid for light and fuel... [then] it was decided the right way would be to build... All the brethren worked on the new hall in the fall and winter of 1899-1900. The hall was finished and opened about the beginning of February, 1900... All was free of debt at the beginning. Later, after the station was built at Roseisle, the hall was moved one mile east to where it now stands on the front street where the village is. It was the custom then for those who worked on farms to work in the bush in the winter, but that year nothing was done but chores (necessary feeding of the cattle and stock) and going to meetings. We had a lunch and talked to those who were [searching]... It would be early morning before we got to bed. Those were happy days...

Thus, as souls were saved and desired to gather alone to the Name of the Lord Jesus Christ, an assembly was formed in 1898 in Roseisle – meeting first in the schoolhouse, and then in the Gospel Hall. At that time there were about 45 in fellowship.

Synonymous with those early days at the Gospel Hall and in the town of Roseisle are the names of Earl and Edith McPhail. At age 17 Earl came to know the joy of sins forgiven through faith in the Lord Jesus during the meetings in the schoolhouse. He was baptized soon afterward and became a part of the original nucleus of believers. In 1910 he married Edith Allen, a schoolteacher in the Sylvan school, and their home was characterized by love and kindness.

After leaving the farm they moved into the town of Roseisle where he operated a garage selling John Deere equipment and Nash Lafayette cars. Many young people found a special welcome in their home.

In 1998 Ed Vanstone of Portage la Prairie reminisced:
“I can remember those very early days coming to Roseisle, and as I sat in Sunday school on those Sundays one thing I have to remember is Mrs. McPhail and her Sunday school class. I can remember sitting there in her Sunday school class with my sister and some cousins from Sperling, and the local children here – a few of us – as Mrs. McPhail in her kind and loving way taught us the Word of God with real love and compassion which I will never forget.”

Mrs. McPhail passed away in 1965, and Mr. McPhail continued on as an integral part of the fellowship in Roseisle for about 75 years until, due to the increasing needs of his age, he moved to Portage where he passed away at the age of 101.

Mr. Walsh, who lived next door to the Gospel Hall on the main street, was well known in the community as the elevator manager, and left his influence on more than one person. Alan Ritchie of Brandon, MB says, “I will always remember working for brother Walsh, for his kindness as an employer and a friend. Often when my routine duties had been done for the day he would encourage me to read my Bible.”

In 1960 one of the Christians from the assembly, Mr. Teichroeb, passed away. As his neighbors Pete and Susie Dyck attended his funeral at the Gospel Hall they were sobered by the message. Returning home they gathered their eight children around the kitchen table and taught them the words to a hymn that was impressed on their minds: “Life at best is very brief – Be in time.”

They began attending gospel meetings seeking peace and answers to questions they had had for years. On December 3, Susie entered into the joy of salvation through the words of Jesus recorded in John 10.9 – “I am the door: by Me if any man enter in, he shall be saved.” Not long after, in February of 1961, Pete was reading a gospel paper entitled “God is Satisfied – Are You?” As he thought of the words of the Lord Jesus on the cross: “It is finished”, the truth of the finished work of Christ became a reality to him and he found peace. As they studied the scriptures in the months that followed they came to appreciate and desire the simple truths of the New Testament. After obeying the Lord in baptism, they were added to the fellowship of the assembly where they continue to this day.

The original Gospel Hall was small and without running water or modern facilities, and in time it became obvious that a new building was needed. In 1978 the new hall was built in the location where it is today.  Names and people have changed over the past 120 years, but God continues to work in the hearts and lives of individuals so that today, as in 1898, a fellowship of Christians gathers in the Name of the Lord Jesus Christ, and to His Name alone. His Name and His Word remain unchanged. And the building in which they meet is still known as the “Gospel Hall”, because the message which is proclaimed is the same as that which the Lord Jesus spoke to a seeking individual over 2000 years ago:
FOR GOD SO LOVED THE WORLD, THAT HE GAVE HIS ONLY BEGOTTEN SON,
THAT WHOSOEVER BELIEVETH IN HIM SHOULD NOT PERISH, BUT HAVE EVERLASTING LIFE. (John 3.16)
- H. Dyck