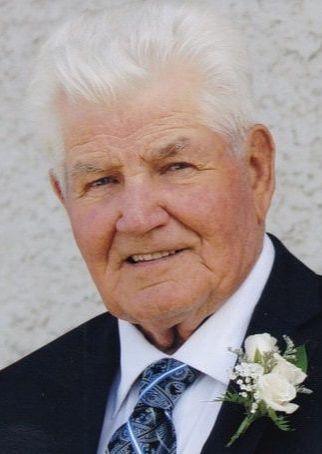 Peter H. Dyck of Roseisle, Manitoba passed peacefully into the presence of his Lord and Saviour on July 29, 2017.

Born to Henry and Maria Dyck on May 29, 1929, Peter grew up on the family farm in Friedensruh, Manitoba, along with his many brothers and sisters.  Although the family experienced times of great sorrow, they also made many happy memories which they enjoyed recounting over the years that followed.

Peter married Suzanna Driedger on June 20, 1948, which was the beginning of a united and happy pathway together.  Over the next ten years they were blessed with six sons and two daughters – Abe, Peter, Henry, Ernie, Jake, John, Judy, and Ruth.

Their early years were spent in Neuemberg where Pete worked for Kroeker farms, later spending a year farming in the Gladstone area, and then moving back to the family farm.  In 1952, he bought a farm 3 ½ miles north of Roseisle where they established a permanent home.  Here they raised their family instilling principles of diligence and industry, in a home where the Word of God was central and eternal values were taught.  And it is here where grandchildren, great-grandchildren, and their many friends and relatives knew they were welcomed and loved. With a smile for everyone and a ready sense of humor every visit was special.

The pivotal point in Pete’s life came in February of 1961, when as a young man of thirty one he understood the truth of the finished work of Christ and entered into the joy of knowing  forgiveness  and peace with God.  Along with Susie, he became an integral part of the fellowship of Christians gathered to the name of the Lord Jesus at the Gospel Hall in Roseisle.  Love for God and His Word molded and gave character to his life, and has left an indelible impact on all who knew him.

Our family would like to express our gratitude to the staff at the St. Claude Personal Care Home for their kindness and excellent care of Peter during his final weeks.  The many expressions of thoughtfulness and compassion shown during these difficult days have been deeply appreciated.